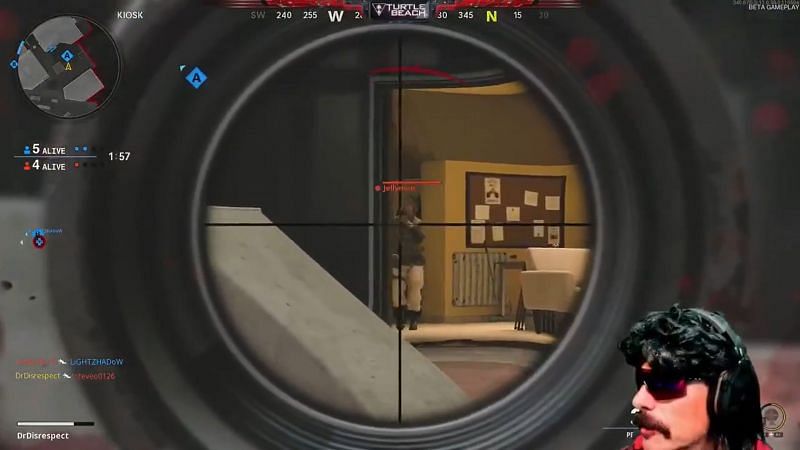 Herschel Guy Beahm IV, aka Dr Disrespect, is undoubtedly, one of the most formidable personalities in the gaming industry, and is known for his unputdownable swagger and skilled gameplay.

Throughout his streaming career, he has cultivated an iconic online persona for himself, replete with his trademark mullet, shades and vest to become a potent force to reckon with. Apart from his larger-than life persona, The Doc is also known for his skilled gameplay and is often known to pull off stunning kills and clutches from time to time.

Recently, the internet was blessed with one such moment, when Dr Disrespect posted a clip of him eliminating an opponent in the Call of Duty: Black Ops Cold War beta, with ease- and without even looking at him:

His money shot proved to be an absolute wholesome moment for the Twitter community, who marvelled at the Doc’s insane gameplay skills.

Dr Disrespect wins over the internet with a no-look kill

Call of Duty: Black Ops Cold War is one of the most anticipated games of the year and is scheduled to arrive on the 13th of November this year.

However, before the official launch, players have been trying their hands at the Beta version of the game, which offers players an exclusive glimpse at what lies in store for them.

Dr Disrespect has bee streaming the game on YouTube recently and he tweeted a clip from one of his recent streams, which left viewers in absolute awe of the 2 x times Champions Club leader.

We witness trademark Doc, as he goes on to eliminate an opponent with precision and without even looking his way:

Check out some of the reactions to Dr Disrespect’s ridiculous no-look shot online:

Nobody does it better

Hit em with the no look. So disrespectful.

It’s not even close…

That always peek at the 2x. They can’t resist

They just can’t help but take another look at the 2 time, 6 foot 8, violent , speedy fast, Doc.

What a mistake that double take is, EVERYTIME.

The real monster of cod!!!!

Irrespective of all the controversy that surrounds him, with regards to his Twitch ban, the Doc continues to be the most dominating gaming specimen who is simply, unparalleled, be it in poise or play.