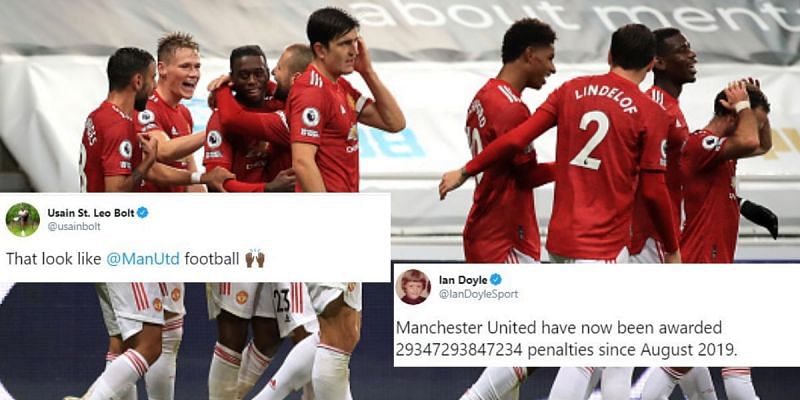 Manchester United recorded a dramatic 4-1 victory against Newcastle United at St James’ Park, as the Red Devils returned to winning ways after losing 6-1 against Tottenham Hotspur.

Ole Gunnar Solskjaer’s side went behind in the second minute, as Luke Shaw turned the ball into his own net. Harry Maguire has been one of the most talked-about footballers in recent weeks, and the Manchester United captain got his side level in the first half.

Bruno Fernandes missed his first penalty as a Manchester United player, as his spot-kick was saved by Karl Darlow in the second half. Just as the Red Devils looked to be dropping points again, the Portuguese star made amends with a stunning breakaway goal late on to put his team ahead.

Aaron Wan-Bissaka and Marcus Rashford added gloss to the result with goals late on, as Solskjaer’s blushes were saved thanks to a late flurry from his side.

Here are the best reactions from Manchester United’s hard-fought victory in Tyneside.

Bruno will do 17 horrible things a game & leave with a goal and assist. I hate him fbbdjdndndnndndjdjdjd

That goal is why VDB and Bruno need to play together. One of the best team goals of the season in the whole league that. And people say he’s a PE teacher

That goal is why VDB and Bruno need to play together. One of the best team goals of the season in the whole league that. And people say he’s a PE teacher

10 – Manchester United enjoyed their 10th comeback win against Newcastle in the Premier League, the most by any side against a single opponent in the competition. Rally.

17 – Manchester United have been awarded 17 penalties in the Premier League since the start of last season, five more than any other side in the competition (12 scored). Gift.

Very pleased with the manner in which Manchester United finished the game.
Juan Mata MOTM for me. #MUFC

All about the counters

A portion of the fans still won’t be pleased, but this was a solid Manchester United away performance. When you attack as relentlessly as they have tonight, scoring late is as good a time as any.

Not great, but much better.

👹 Manchester United come from behind to win at St. James’ Park courtesy of late goals from Fernandes, Wan-Bissaka and Rashford

Man Utd fans are googling for the dates of next International break.