Is this the best ‘mum hack’ of 2020? Home cook shares the ‘genius’ way she re-uses bread crusts and transforms them into a mouthwatering treat

A home cook has shared her ‘mum hack’ for using the crusts of bread that her kids make her cut off when she prepares their school sandwiches, and it’s a hit with parents everywhere.

The Australian woman called Jasmine said she keeps any crusts that her kids haven’t eaten and puts them in a plastic sandwich bag in the freezer, before later using them as French toast chips for weekend breakfasts.

‘This isn’t healthy and it’s not about what to pack in their lunchbox, but it is about making use of the sandwich crusts you make for lunches if your kids are like mine and want the crusts off their sandwiches,’ Jasmine posted on Facebook.

‘If you’re sick of wasting crusts, then I’ve got a mum hack for you!’

Jasmine’s ‘hack’ involves cutting the crusts off slices of bread, and putting them into a zip-lock bag, which she puts directly into the freezer.

As soon as she has a full bag, Jasmine said she will de-frost the crusts and dip them into French toast mixture before cooking.

‘You end up with yummy French toast chips for a Sunday breakfast that the kids suddenly love,’ she said.

‘We are allowed egg at our school, but this might not be a school snack if your school doesn’t allow it.’ 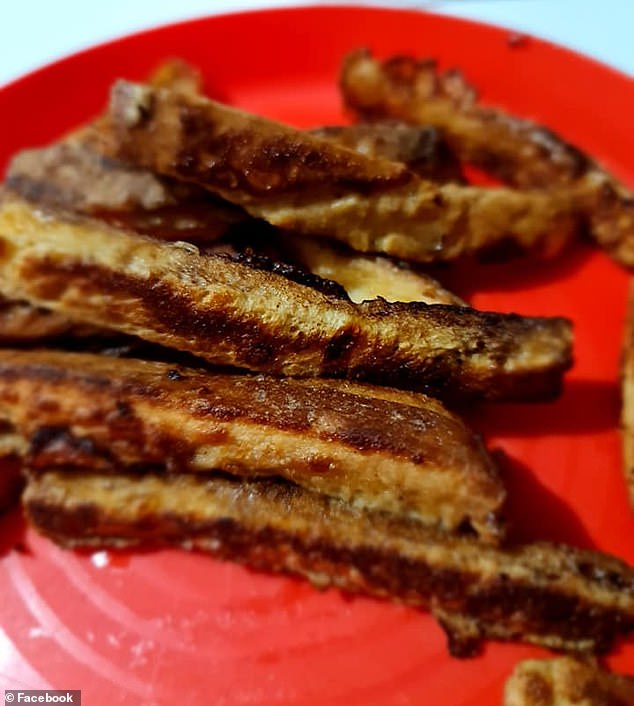 Jasmine keeps any crusts that her kids haven’t eaten and puts them in a plastic sandwich bag in the freezer, before later using them as French toast chips for weekend breakfasts (pictured)

The budget trick was a huge hit with parents across Australia, who said it is ‘so clever’ and a ‘such a good no-waste idea’.

‘We have baked them until they’re crispy like croutons, and then dusted them with cinnamon sugar,’ one fellow parent suggested.

‘I used to cut them off, then put peanut butter, Vegemite or Nutella on the bread side and fold them and they were then had as a snack for morning tea,’ another mum added.

Other parents said they use the crusts for savoury snacks, combining them with olive oil, a little thyme and Parmesan before baking the dish in the oven. 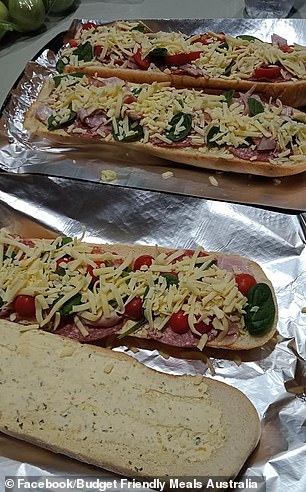 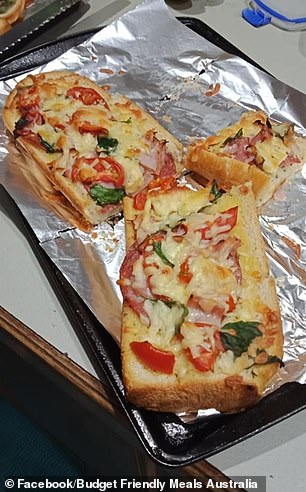 This isn’t the first budget-savvy trick that has proven popular online.

Just last week, a mother was praised by hundreds, after she shared her ‘super cheap and easy’ meal trick.

The Australian woman, called Peta, posted on Facebook, where she shared how she put together garlic loaf pizzas by using Woolworths’ $2.90 garlic bread, salami, spinach, tomatoes and grated cheese.

‘I saw something similar on another page and thought: Why haven’t I done this before?’ Peta posted on Facebook.

Peta’s meal for two costs around $5 per person.

To make the simple dish, all you need to do is bake the garlic loaves with whatever topping you fancy in the oven for between 12 and 15 minutes.

Then, serve with vegetables or a side salad.