By Lydia Catling For Mailonline

Russell Brand sparked outrage on Twitter after saying he was ‘surprised’ at the ‘poetic language’ used by ‘two working class men’ to describe his dog.

The 45-year-old comedian posted on his social media account yesterday to share his surprise as two men he met with his dog Bear and described it as ‘apricot’ and ‘cinnamon’ coloured.

His words angered hundreds of Twitter users who suggested he was ‘condescending’ and ‘patronising’ to suggest working class people would not know how to use the adjectives. 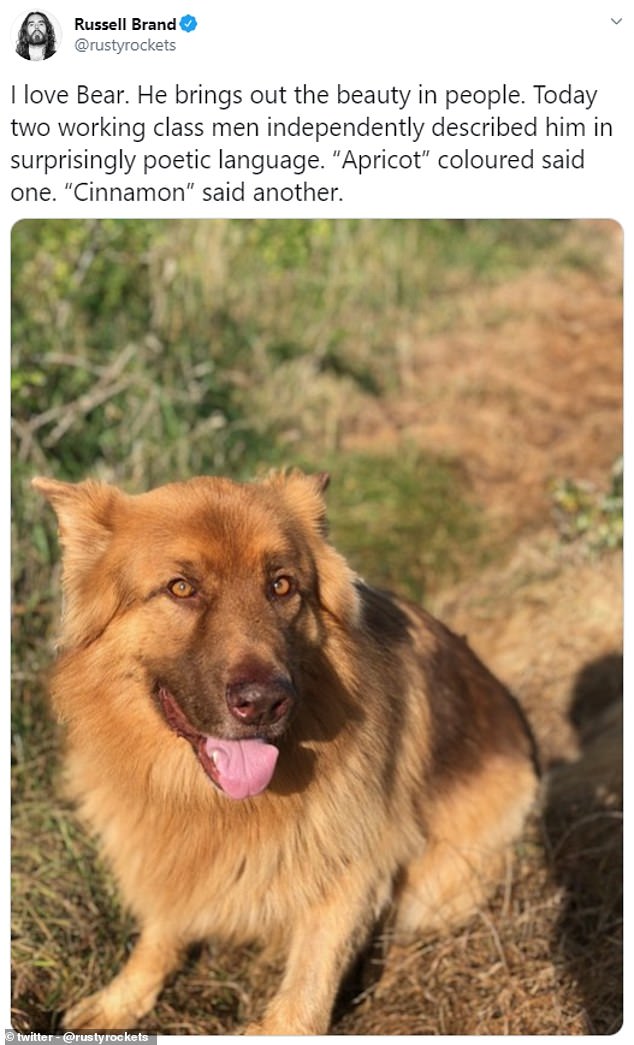 After claiming his dog ‘brings out the beauty in people’, people were quick to question what he meant by his post.

One person said: ‘Wow, the working class are articulate and know how to use adjectives. I wonder what adjectives they’d use to describe the dog’s owner? ‘Patronising’ ‘Condescending’.

Another tweeted: ‘Could you actually be more patronising? You talk like we have no vocabulary.

‘I’m a working class gal from a council estate and managed to get a first class degree with honours and quite capable of speaking eloquently if I want.’

‘You’ll be pleased to know Russell, that even though apricots don’t grow down in the mines, we working class have a slightly better grasp of food than just chips,’ said one irritated man.

‘Also, we know words. Since the beginning of the 20th century, we’ve been going to school and everything.’

Others mocked Russell’s tweet, making light of his controversial statement: ‘The working class men were truly amazed by this cinnamon creature. “Never before have we seen a ferret this size,” they told ol’ Mr Brand.’

Others expressed their shock at the comedian’s tweet, questioning whether he believed working class people were ‘colour blind or stupid?’

Others came to the Brand’s defence, claiming his tweet was a joke and questioned why people were so offended.

One woman claimed the celebrity was a ‘working class ally’: ‘Middle class liberal commentators really showing themselves up here.

‘You’d do well to realise that Russell has spent most of his life being an ally to the working class.

‘He’s not ashamed of the terminology. Just because it’s a shock to you when someone mentions the ‘C’ word.’

While some were irritated by the stand up star’s tweet, others came to his defence and suggested it was a joke and claimed he is a ‘working class ally’

The same Twitter user also suggested Brand’s tweet was a comment on the ‘delicacy’ of the language he claimed the strangers used, something she said ‘you don’t stereotypically hear from working class men’.

The stand up star is yet to respond to any of the comments he has received on yesterday’s post.

His latest Twitter update comes after he was seen flouting social distancing rules after a performance of his new comedy show Brand-emic last week. 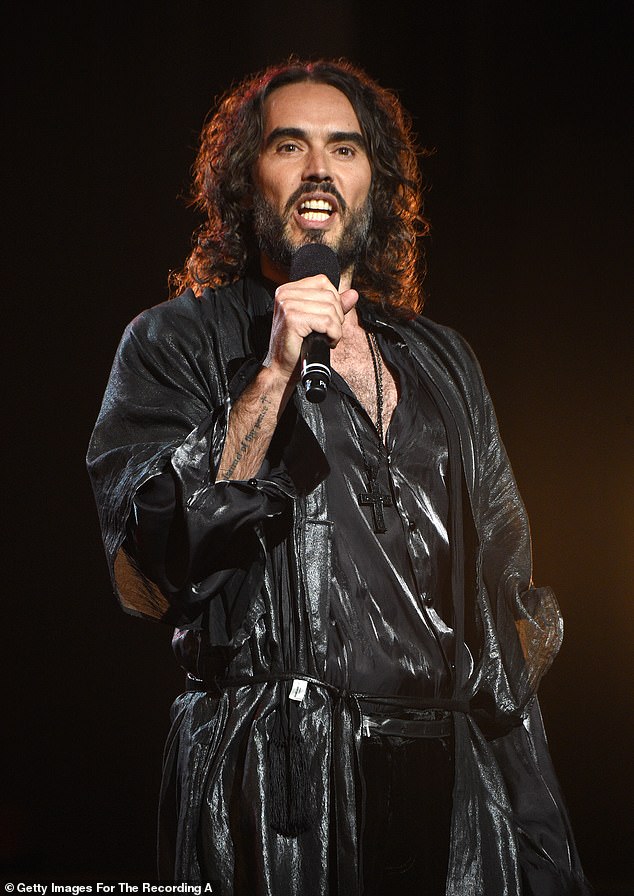 The stand up comedian, pictured in January 2020, explained he was surprised to hear the two men he had met using ‘poetic language’ when they described his dog as ‘apricot’ and ‘cinnamon’ coloured

Brand was pictured posing for pictures with audience members and also hugged a fan while not wearing a mask – despite claiming on social media that everyone at the gig had some ‘socially-distanced’ fun.

According to The Sun, Russel told fans that he had ‘better go’, because he was ‘flouting social distancing rules’.

The publication also reported Russell told the crowd that he wanted to ‘walk the f**k off the stage’, after joking how ‘poorly attended’ his show was. Russell’s show wasn’t actually poorly attended, he had a socially-distanced audience as required.