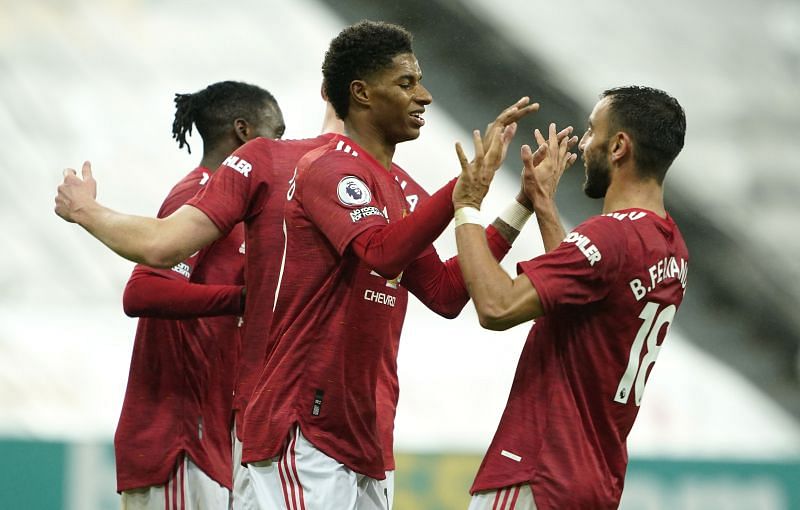 United huffed and puffed their way through the first-half and went into the break level, after Luke Shaw’s early own goal was cancelled out by a great Harry Maguire header off a Juan Mata corner.

Bruno Fernandes missed a penalty in the second half, but made amends a few minutes later by putting United in the lead. Aaron Wan-Bissaka and Marcus Rashford put the exclamation marks on the win, as United warmed up for the week’s UEFA Champions League fixture against Paris Saint-Germain in a rather ideal fashion.

Here’s a look at how each individual player performed for Manchester United.

He was partly culpable for the goal that United conceded, given that he had enough time to readjust and react to Shaw’s hack. But he well and truly made amends with a couple of great saves, especially one off Callum Wilson, that kept the score at 1-1.

Wan-Bissaka scored a rare goal for himself with a thunderous finish past Karl Darlow in the Newcastle goal. It was nice end to an evening that began with him being given a hard time on the flank by Allan Saint-Maximin.

He came back into the side to replace Eric Bailly, and didn’t look out of place at all. He dealt well with Callum Wilson, matching the Englishman’s pace, and also not losing out on the strength duels.

The Manchester United captain bounced back well from his England horror-show during the week. He began the Red Devils’ comeback with a towering header from Mata’s corner.

Even the own goal aside, Shaw didn’t play particularly well. He had plenty of space to move forward and create opportunities, but his decision-making in the final third was atrocious.

McTominay did not have the best of games for Manchester United. He was sloppy in possession, and was definitely having a tough time against Shelvey’s passing range.

Fred was very effective in his midfield shielding role on his side of the pitch. McTominay was more worked with Newcastle turning to Saint-Maximin to carry the ball forward at every available opportunity.

The Spaniard had a very good game for Manchester United, in his role cutting in from the right flank. He linked up sumptuously with Bruno Fernandes. After setting up the first goal, Mata also played a pivotal role in the build-up to the second.

It was an action-packed second-half for Fernandes. He first missed a penalty, but then stepped up to score a beautiful goal, and also set up Rashford’s goal.

His pace caused Newcastle some problems, but he let himself down with the decisions he made in the final third.

He won Manchester United a penalty, but it was his running in behind the Newcastle defence that created loads of trouble for them. He set up Fernandes’s goal, and then took his goal well, after being set up by Fernandes.

Pogba did nothing spectacular in possession, but his presence was a boost for United in the midfielder area.

He started off the move for United’s second goal with a lovely exchange of passes with Fernandes.

The Serbian on only in second-half stoppage time