Skip to content
HomeNewsMy haven, John Nichol: The Gulf War hero and author, 56, in the office of his home in Hertfordshire

My haven, John Nichol: The Gulf War hero and author, 56, in the office of his home in Hertfordshire

By York Membery For Weekend Magazine

John Nichol, 56, (pictured) shared the items of personal significance in the office of his home in Hertfordshire

1 OUT OF THE WRECKAGE

I joined the RAF in 1981, qualified as a navigator, and took part in Operation Desert Storm in the first Gulf War.

In January 1991 my Tornado was shot down by an Iraqi missile and my pilot [John Peters] and I were held hostage for seven weeks.

This pitot tube [mounted on the wooden panel], which measures a plane’s airspeed, is from my actual Tornado, and was retrieved from the wreckage by British forces at the end of the war.

I met a number of WWII Air Force veterans during my RAF days and knew that if we didn’t get their wartime experiences down on paper they would be gone forever, hence my latest book about the Lancaster bomber [below], which tells their stories.

RAF Bomber Command took the fight to Nazi Germany from the start to the end of the war in a battle for our survival.

The cost was shockingly high: more than 55,000 of the 125,000 aircrew were killed. I have yet to go up in a Lancaster because there are only two still flying – one in the UK, and one in Canada. Maybe one day…

My golden retriever, Ted, was part of a Guide Dog For The Blind litter and is the most fabulous dog. He’s loyal, handsome and helps keep me, my wife Suzannah and our 14-year-old daughter Sophie company. 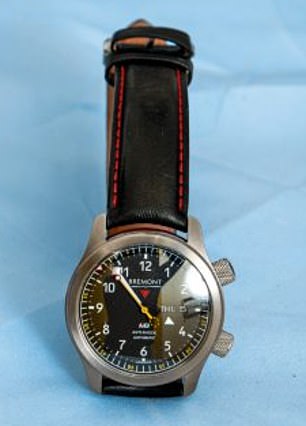 We go for long walks in the countryside, which is my way to relax. He’s not one for tricks, though – giving me a high five in return for a piece of toast is about as good as it gets!

I’m proud of my Bremont MB1 watch – you can identify it by its red aluminium barrelon the back. It’s awarded to airmen and women who have used a Martin-Baker ejection seat in an emergency.

The seats have saved the lives of over 7,500, and the back of each watch is engraved with a number.

I also met Jo Lancaster, the late WWII pilot turned test pilot who in 1949 was the first to eject in a Martin-Baker… and was given the first Bremont watch.

Growing up just outside Newcastle, I was a keen Scout, and this was taken on a camping trip to Northumberland. I’m wearing the tartan waistcoat.

I was a Cub and then a Scout until I joined the RAF at 17. Scouting is all about independence, teamwork, self-discipline and survival – and the last two qualities held me in good stead when I was taken captive.

In 2016, Sir John Major spoke at a 25th reunion dinner of British and US air crew and special forces taken hostage in the first Gulf War, at the RAF Club in London, and he signed his memoirs for me.

The former PM expressed his gratitude for all that we’d done, and spoke movingly of the responsibility he felt sending into battle men and women the same age as his son, some of whom he knew would never return.

As told to York Membery. Lancaster: The Forging Of A Very British Legend by John Nichol (Simon & Schuster, £20) is out now. Twitter: @JohnNicholRAF