It’s been more than a month since its official launch, and the Travis Scott Fortnite Burger continues to trend online.

Ryback Allan Reeves, known popularly as Ryback, is a professional wrestler, known for his time with WWE.

After rising through the brand’s NXT program, he went on to join one of the WWE’s most formidable stables, The NEXUS, and would also headline multiple pay-per-view events.

Apart from his wrestling career, the former Intercontinental Champion also has a YouTube channel called RybackTV, with around 254K subscribers. His channel caters to his in-ring persona and catchphrase, ‘feed me more’, as it is primarily a food channel where the 38-year-old wrestling star takes on a variety of different eating challenges.

Recently, Ryback attempted to break popular competitive eater Matt Stonie’s world record of the fastest ‘Travis Scott Meal’ eaten, which stands at an unbelievable 46 and a half seconds!

The Travis Scott McDonald’s meal is one of the most popular meals in recent memory and is also commonly referred to as the Travis Scott Fortnite burger, on account of the rapper’s association with Epic Games’ popular battle royale game.

The Travis Scott Fortnite Burger is a classic bacon burger, which along with a side of fries with barbecue sauce and a Sprite, constitute the Travis Scott McDonald’s meal.

Ryback can certainly eat but was it enough to conquer Matt Stonie’s world record of the fastest Travis Scott meal eaten? 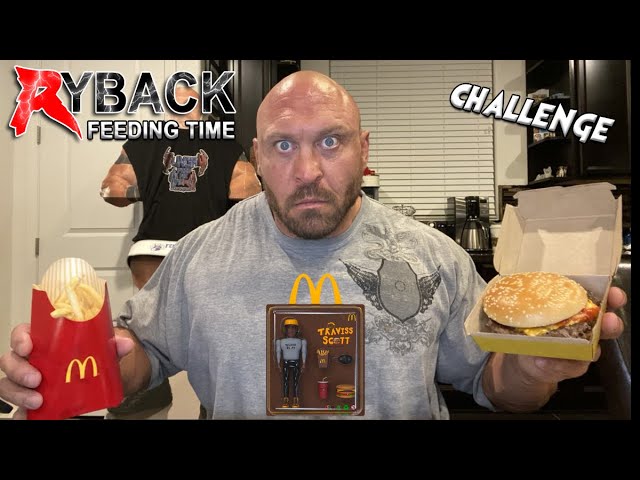 In addition to being an award-winning rapper, Travis Scott has also become canon in the Fortnite universe, thanks to his mesmerising ‘Astronomical’ concert which raked in millions.

He would soon go on to release an exclusive line of merchandise, in addition to an exclusive action figure, as the world came to associate him with being a Fortnite star.

Thank you to everyone who attended and created content around the Travis Scott event!

His recent collaboration with McDonald’s made him even more popular as his very own meal soon became the talk of the town, with various celebrities getting their hands on it.

At the beginning of the video, Ryback realises that his Travis Scott meal does not have bacon:

“They gave me everything except the bacon. So I’m going to have to title this the NWO Travis Scott meal, if you’re a wrestling fan, you get it.”

Without wasting anymore time, Ryback proceeds to devour the Travis Scott meal and while his performance is certainly exceptional, it falls short of Matt Stonie’s world record by more than a minute.

“Clearly, nowhere near Matt Stonie’s time…under two minutes though for my real speed eating challenge , man how does he do this so fast? I think that’s a respectable time . “

While Ryback may have failed the Travis Scott test, he certainly ended up winning hearts with his wholesome YouTube video.